Congratulations to our 2014 Scholarship Winners!

We are pleased to announce the tradition will continue in 2012.

“Having been on scene too many times to count and witnessing first-hand this repeated dedication, devotion to duty and, in many cases, outright heroism, we set out to find a way to recognize those vast efforts,” Restoration Logistics spokeswoman Jamie Bruce said. “The Colorado Fire Service Scholarship Fund is a perfect way to do just that.”
The goal of the fund was to provide scholarships not only to good students, but to those who exhibited exceptional achievement, going above and beyond their peers, just as their firefighter family members go above and beyond the call of duty.

For more on the scholarship, including how to apply, click here.

In 1978 Doug Hall signed on as a firefighter with the city of Westminster. On June 27 he ascended to the city’s top job in that department, replacing retired Chief Jim Cloud.

Previously Hall was the city’s deputy chief for administration. 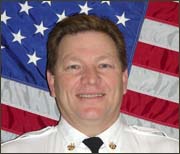 “We were fortunate to have a tremendous pool of applicants from all over the country for this important public safety position in the city,” said Brent McFall, Westminster city manager. “Doug Hall brings an energy and enthusiasm that will lead our fire service into the future.”

Hall has also served the city as an Emergency Medical Service coordinator and fire marshal. He has been a deputy chief since 2007, overseeing the EMS and fire protection services, as well as overall administration and policy for the department.

Founded in 1934 as a one-station, volunteer department, the Westminster Fire Department has grown to more than 135 career firefighters, paramedics and support staff who serve the city from six fire stations and the administrative offices in the city’s Public Safety Center.

Hall is a former board member of the Colorado State Fire Chiefs Association and a past president of the Fire Marshals Association of Colorado.

“Serving the City of Westminster as fire chief is a wonderful opportunity to work with great people in providing exceptional services to our residents and businesses,” said Hall. “The future for Westminster is likely to be exciting with many new challenges and it’s great to share a key leadership role in its continued development.” 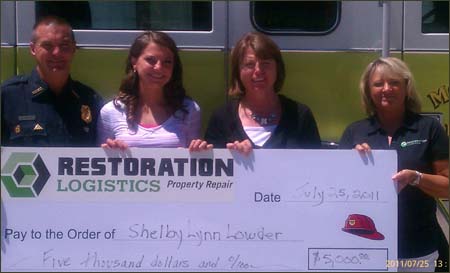 Shelby Lynne Lowder, the winner of the 2011 Restoration Logistics Colorado Fire Service Scholarship award is no stranger to emergency services.

Her father,Sheldon Lowder is a 14 year veteran of the Monte Vista Fire Department. Both Shelby’s mother and father have worked as Emergency Medical Technicians for both Monte Vista and Alamosa Ambulance Services.

Shelby plans to continue the tradition of serving in emergency services and the health care industry. She is currently enrolled at Utah State University where she will complete her pre-requisites for acceptance into Nursing School. Shelby moved to Utah earlier this summer to complete her Basic Life Support class and enroll in the Certified Nursing Assistant Program.

Congratulations to Shelby and her family.

I am writing to commend your staff for a job well done. In December 2007 we had a major flood in our crawl space from a broken pipe. Your representatives responded to our call immediately. They were professional and engendered our confidence.

I particularly want to mention Justin Blackburn, Dan Travers and Dan O’Callahan. These gentlemen were outstanding in their expertise in dealing with the situation. Mr. Blackbird’s ability to deal with the insurance company was especially helpful. He clearly understands how insurance company people think and was able to guide the situation in a direction that ultimately benefited me.

During the process of figuring out how to proceed and whom to believe, I interacted with several companies who ultimately proved themselves to be inferior, lacking in expertise, or just plain dishonest. Mr. Blackburn made many observations which withstood critical scrutiny and kept me on the right path. This was all before we decided with whom to entrust our remediation.

In summary we were very pleased with all aspects of our remediation and would recommend DRI without reservation.

A supercell thunderstorm rocked metropolitan Denver with a tornado and large hail during the early afternoon of Wednesday 5 / 26.  While no tornado damage report statements had been released at the time I’m filing this report, several reports of damage from the large hail have surfaced:

Disaster Restoration has emergency teams standing by to assist business and home owners recover from the storm damage.

I am doing great, thank you! I hope all is well on your end as well.

After graduating from Colorado State University, I worked for a year and a half as a professional research assistant at University of Colorado School of Medicine in Aurora, CO. I was engaged in the fields of Otolaryngology and Endocrinology. In the summer of 2008, after a year of “relaxation” and getting married to my high school sweetheart, I began applying to medical schools. After being accepted to several schools throughout the nation, I decided to attend Midwestern University in Glendale, AZ. I am studying to become a physician and will graduate in 2013. I will then head into my residency training, but I have not yet determined what field I plan to go in to. My husband and I would love to end up back in Colorado when all is said and done.

I want to again thank you all for selecting me as a scholarship recipient. I am always on the lookout for scholarship opportunities for graduate medical education (have yet to find any other than one offered by Tylenol). Please keep me informed if you offer anything of this nature or know of any opportunities you feel might be beneficial for me in my endeavors. Additionally, I would love to read your newsletter that you put together. Thanks so much for your interest,

The EPA is introducing a new law which affects common renovation activities like sanding, cutting, and demolition when working around lead-based paint. The new law will go into effect April 22, 2010 and requires all contractors performing renovation, repair and painting projects that disturb lead-based paint in homes, child care facilities, and schools built before 1978 must be certified and must follow specific work practices to prevent lead contamination.

As Colorado’s leading disaster restoration company DRI is prepared for these new changes.  For more information on the new EPA laws governing disturbing lead-based paint follow the links below:

Fire can be a manager’s worst nightmare and we’ve helped repair and restore large and small properties after fires.  In fact, for over a decade DRI has been Colorado’s #1 property fire restoration company.  By following 3 simple tips you can help keep small fires from becoming major disasters:

DRI is accepting pre-applications for the 2010 scholarship program. The scholarship will be awarded on the basis of need and merit. DRI welcomes applications from children or grandchildren of all line and office personnel of both career and volunteer departments.

Disaster Restoration, Inc. (DRI) is committed to supporting the fire service community of Colorado. DRI is proud of the men and women who keep our community safe and as a way to show our appreciation we offer a scholarship to the children and grandchildren of active Colorado fire service professionals.

The deadline to submit a pre-application is March 12, 2010.  The scholarship committee will be mailing complete applications to all students who submit a pre-app during the week of March 15th.  Students will have approximately 30 days to complete and return the full application packet.  A final decision on the scholarship award will be made in May .  If you have any questions about the scholarship or if you would like to contact us directly please call 303-657-1400 or email dri-scholarship@disaster-experts.com for more information.  The pre-app is available to download from the DRI news tab of our web site at www.disaster-experts.com